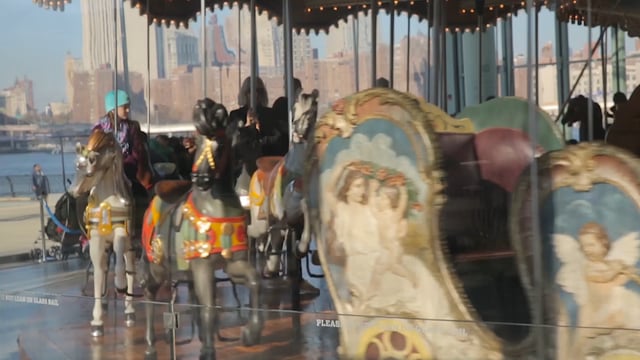 (NEW YORK) August 25  2017 – Membit Inc. the only Augmented Reality app that lets anyone create precisely aligned augmented, markerless, content anywhere, and Oblix today announced the “Future of Time Travel” event. The AR and VR event will take place in New York City on Friday, August 25th. The gathering of investors, engineers, members of the press and friends of the booming sector will converge at AES NYC’s Venue 57 in Manhattan. Membit will commemorate the event with the premiere of a new video “Meaning of Membit” which encapsulates how Membit will lead the way into a pendulum swing back toward “You, Me, Here, Now”.

The two companies will also be announcing a pilot program blending Augmented Reality and Virtual Reality powered by both startups. As part of the pilot, Membit and Oblix are partnering to make any membits created at the FOT party on August 25th available to  be viewed in VR at the next FOT event at South By Southwest 2018.

“Oblix and Membit believe The Future of Travel is definitely going to include AR and VR.” Said Jay Van Buren, CEO of Membit, “We’ve been described as “Pokemon Go for your Memories” because people can record moments and relive them. It’s a perfect partnership as Oblix allows the exploration of  a virtual, three dimensional Earth where users relive and share their experiences with friends around the world.”

Membit will also announce the formation of an advisory board including Internationally renowned, emerging technology blogger, Robert Scoble. Scoble will advise the team on how to further ignite the app’s beta and rising popularity with brands and consumers alike.

“Membit is a remarkably simple and direct application of augmented reality for a consumer audience and it’s patent fills a specific unmet need in the AR community.” said Robert Scoble “I’m genuinely excited to advise the app to its next phase as it announces new features like friending and new partnerships.”

“At Oblix, we’re excited about enabling people to travel the world in virtual reality through our product,” said Siddharth Saxena, CEO of Oblix. “We are an open platform; a metaverse where individuals and businesses can integrate their own content into our world. Our partnership with Membit will be an important step in achieving this vision, launching a new way for consumers to save memories to Oblix, directly from the Membit app.”

Additionally, Membit is announcing a partnership with Agingo.com, a company focused on using the blockchain to allow consumers to create trust relationships with content providers to explore ways to bring trust and verifiability into the world of augmented content.

Membit ™ is a new way to share memories. When you make a membit, you leave an image in place for other Membit users to find and enjoy. With Membit, you can share the past of a place with the present, or share the present of a place with the future. Membit is a geolocative photo sharing app that allows pictures to be placed and viewed in the exact location they were captured. Membit’s patented Human Positioning System (TM) allows for markerless Augmented Reality to be used anytime, anywhere, by anyone.“About as close as we got to seeing a time machine at TC Disrupt.” One of the 20 most fascinating iOS apps from TechCrunch Disrupt,” MacWorld. Membit is available for iphone and ipad.  Follow us on Twitter and Instagram @membitinc for updates and for more information, please visit us at www.membit.co

Oblix is an open, social platform for virtual reality. It is a virtual recreation of the real world where individuals can explore, add content, and interact with each other. Oblix is a user-generated content platform that will allow individuals and businesses to upload and share an array of VR content – ranging from 360° photos, 360° videos, to custom VR experiences. Oblix’s spatial user interface provides the newest and most compelling way for people to access VR content and experiences. Oblix will soon be launching for Oculus Rift, and eventually across all major hardware platforms. To find out more about Oblix, follow us on Facebook, Instagram, and Twitter @oblixvr. You can also visit us at www.oblixvr.com.